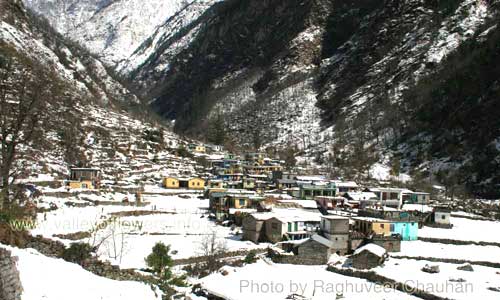 Valley of flowers National Park is situated in western Himalayas in Uttarakhand State of India. It is high altitude valley and its height varies from 11000 feet to 12500 feet. It is stretched over an area of 84 square kilometer. Valley of flowers in winter is snow clad and is not at all accessible by trekking.

Valley of flowers in Winter.

The Valley of Flowers is accessible from June to September only. It officially opens on 1st June and closes on 4th October every year. The Valley of Flowers is snow clad for most of the year. Snow starts falling in the month of October itself and by November the valley is full of snow and all the plants get buried under a thick layer of snow. It remains snow clad for almost another six months. By April when temperature start raising the snow starts melting slowly. Gradually the plants buried under the snow can be seen and the seed put down by them last year start germinating.

According to their turn they come out one by one it happens in such a disciplined manner that you can see the same variety of flowers in same week every year.