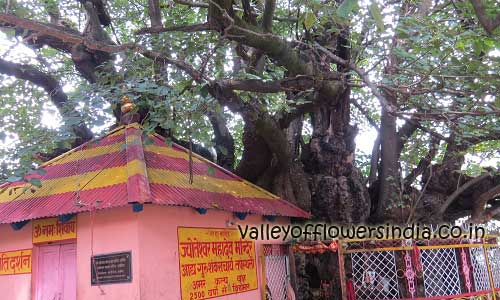 Joshimath is a small town in Garhwal region of Chamoli District in the state of Uttrakhand, India. It is situated at a height of 6200 feet above sea level. The word Joshimath is derived from Jyotirmath (ज्योतिर्मठ) . Adiguru Shankracharya founded one of the four piths “Centres’ here. It is the halting place for pilgrims going to Hemkund Sahib and for Badrinath. Nature lovers going to Valley of Flowers also stay here for one night, especially after the floods washed off Govindghat hotels. It is very sacred place for Hindus as the Badrinath (God Vishnu) resides here in winters when Badrinath becomes inaccessible.

There are many temples in Joshimath worth visiting. There is a mulberry tree in Joshimath which is believed to be 2500 years old. It is called Kalpavriksha (कल्पवृक्ष) or wish fulfilling tree.

Joshimath is connected to Auli by cable car which is world’s highest and longest cable car. It is useful when the road blocks due to snow fall in winter. It is almost 4 km long and takes almost 10 minutes to reach Auli from Joshimath.

Indian Army has a full Brigade based at Joshimath you can see lot of army personnel in the town. Especially the army area is very posh and clean.

Joshimath has all middle class hotels and lodges. Do not expect too much luxury at Joshimath. Some of the hotels are Hotel Dronagiri, Hotel Mount view, Nature Inn and Snow Crest. You can also try government operated Garhwal Mandal Vikas Nigam Hotel.