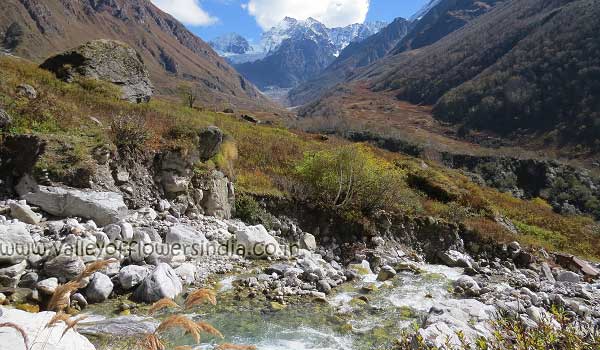 On 17th May, 2013 there were massive floods in Uttrakhand. Several thousand causalities occur in Kedarnath Valley. Fortunately there were no casualty in the Valley of Flowers area i.e Bhyuandar Valley and Alaknanda Valley. But all of the rivers in Uttarakhand were flooded and the buildings on the bank of the rivers collapsed, hundreds of bridges washed off.

Valley of Flowers after floods

Our Valley of Flowers was also affected by the flood but the good news is the flowering area in the valley is totally intact only the trek from Ghangaria is affected. We went to the valley in first week of October, 2013 to access the loss and clicked some of the rare and exclusive photographs of the valley after the floods. The trek between Govindghat and Ghangaria is also washed off at some places but has been rebuilt already. Between the trek there are two villages namely Pulna and Bhyuandar. Unfortunately Bhyuandar is completely washed off. There was no damage at Hemkund Sahib as most of the damage is in the valleys. There was huge damage at Govindghat and most of the hotels were washed off. The main Gurudwara building also got damaged.

The trek between Govindghat and Ghangaria was 14 km earlier but due to redesigning it is now increased by at least 1 km.

Whether the trips to Valley of Flowers and Hemkund Sahib will be possible in 2014.

Hemkund Sahib was opened from 21st September to 10th October in 2013 just at the end of the season. Valley of Flowers was not opened to public but was accessible. So the trips in 2014 will be possible. Uttarakhand Government has given the contract of constructing bridges and treks to BRO (Border Road Organization) a division of Indian Army. They are very efficient in doing this and we are sure that they will do the work well before time.